Today’s release of the OECD’s five-yearly TALIS survey of teachers and leaders is a chance to confront reality. The challenging situation facing English secondary schools is no secret: it’s been the subject of innumerable reports, advisory groups, and columns.

There are too few teachers, too few new recruits, and too many quitting the profession early. The number of pupils in secondary schools is growing fast and, unless recruitment and retention rises dramatically, schools will be faced with difficult decisions about the breadth of their curriculum, class sizes, and their ability to provide for pupils with additional needs.

Our analysis of the 2013 TALIS survey found that teachers in England work longer hours than their counterparts across the OECD and do so largely because of the time they spend on planning, marking, writing assessments, and doing other administrative tasks. We found that the long hours hindered their ability to complete professional development and that these problems are particularly acute among novice teachers.

The government has not been idle in addressing these issues. Its response over recent years has included launching the Workload Challenge in 2014; the creation of a workload advisory group; the publication of a workload reduction toolkit in 2018; and the publication of the Teacher Recruitment and Retention Strategy of 2019, which included a new Early Career Framework and retention payments in shortage subjects.

After five years of effort this is an opportunity to evaluate how much progress has been made and what the chances are for the more recently announced policies. However, it’s important to remember that the TALIS survey happened in early 2018, which is before some of those policies were announced and before the government broke the public sector pay cap to give main pay scale teachers a 3.5% pay rise.

TALIS surveys the views of 2,000 teachers and headteachers at English secondary schools feel about their jobs. This first volume, along with the Department for Education’s report, prepared by John Jerrim and Sam Sims, covers the work teachers do, their motivations for joining and remaining in the profession, and the content of their initial training and professional development.

Shortages are affecting the quality of teaching

Teachers and headteachers in the surveyed secondary schools both identify teacher shortages as the greatest obstacle to providing excellent teaching. 38% of headteachers in England point to a shortage of qualified teachers as the greatest barrier to providing high-quality teaching in their school, nearly double the OECD average of 21%. Among teachers, 73% said that recruiting more teachers is a highly important spending priority in their school, while two-thirds called for more support staff. These results show that the shortage of teachers is not something that is only seen in the national figures: it is being felt by those working most secondary schools at both the teaching and leadership levels.

Workloads have not improved

Undoubtedly the most eye-catching headline from this release is that, despite the government’s efforts, full-time, secondary teachers’ working hours have risen from 48.2 hours per week in TALIS 2013 to 49.3 hours in 2018. The hours for primary teachers are longer still, at 52.1 hours each week.

That is still a very large proportion but it does indicate that there is more to the workload story than simply the number of hours worked, and recent research in the UK suggests that the missing link may be job satisfaction.

TALIS paints a mixed picture of job satisfaction among English teachers. It is reassuring that nearly 80% of them are, on the whole, satisfied with their jobs. However, compared to teachers in other OECD nations, that is a fairly low figure. Moreover, over half of secondary teachers wonder whether they would have been better off in another career, and a third say they would have chosen a different career if they could decide again. These results are also poorer than in 2013.

With increasing workloads and declining job satisfaction among secondary teachers it is unsurprising that the number of teachers is falling and quit rates are increasing. Unless the retention strategy can turn things around, the government will need to plan for a protracted shortage of qualified teachers in secondary schools.

The two central planks of the retention strategy are stronger support for early-career teachers and retention payments to keep teachers in shortage subjects like maths and physics. Evidence from TALIS gives us an indication of the likely success of both.

Professional development not only provides teachers with extra skills but can also improve their job satisfaction and the likelihood of them remaining in the profession. The OECD find a particularly strong relationship in England between teachers’ job satisfaction and participation in professional development. It may be that the improvements in professional support for early-career teachers will have a marked effect on the retention rates of young teachers.

The survey also found that 87% of secondary teachers felt that they were underpaid, relative to similarly-qualified professionals – an increase from 2013. A similar proportion said that the reliable income provided by teaching was of moderate or high importance in their decision to become a teacher. Together with recent research on retention payments, this indicates that improving teachers’ pay is a worthwhile route to boosting retention.

The results of TALIS 2018 show that policy efforts to reduce teachers’ workload and improve retention look to have failed. Workloads have risen and job satisfaction has fallen.

There may be some grounds for optimism: the latest government strategy seems to draw on the best available evidence and is supported by the views of teachers in this survey – and improving professional development and increasing early-career wages are promising avenues to increase retention.

However, as evidenced today, the failure of past efforts should make us cautious about forecasting success.

You can read all of the TALIS findings for England here.

The full TALIS results can be accessed here.

A shorter version of this blog originally featured as an op-ed in Schools Week. publications
Teacher trainee numbers: what does the latest release tell us? 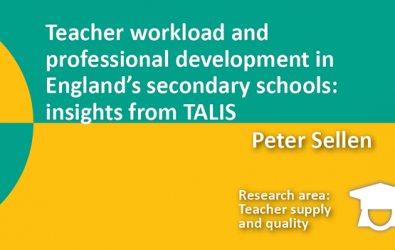 publications
Teacher workload and professional development in England’s secondary schools: insights from TALIS
Subscribe to our Newsletter
Our newsletter will keep you up to date with our most recent publications, reports, briefings and events on education and young people’s wellbeing
Subscribe
This site uses cookies: Find out more.