In March 2018 at an EPI conference, Philip Augar launched a call for evidence for the post-18 education and funding review, which he had been asked by the Secretary of State to chair.

Fourteen months later, following much impassioned debate, a great deal of speculation, and a series of leaks, the panel finally published its recommendations for the government.

Just three weeks before the panel’s report was published on the 30th May, we set out our own proposals the various policy options under consideration in the review. So how do the panel’s recommendations stack up against our own?

Firstly, the areas of broad agreement:

EPI recommendation: Any reduction in tuition fees should be at least partially offset by increasing teaching grants, with priority given to grants for high-cost subjects, and the government should rule out creating a variable fee system.

The panel recommended cutting tuition fees to £7,500 offset by an increase in teaching grants that more accurately reflect subject costs and its social and economic value. Although much of the attention here will go on the impact on the debt and contributions of graduates, equally important is the fact that this change will allow the government to redress the perverse incentives within the current system for universities to recruit on the basis of profit margins rather than labour market demand. This is a positive step.

EPI recommendation: A UCAS tariff floor should not be introduced without robust evidence that a significant majority of those affected would be better off pursuing alternative education or training pathways.

On the much-debated policy of imposing a minimum academic standard to access university loans, the panel recommends a hiatus on such a ‘tariff floor’, in order to give the sector a chance to improve the poor labour market outcomes for the young people who might be affected by such a floor. We agree with this approach. But in the event that it is unsuccessful, the government must present clear evidence that the outcomes for these young people would be improved by pursuing alternative education or training pathways before introducing a tariff floor.

Equivalent and Lower Qualification (ELQ) restrictions prevent those looking to study at a level at or below which they are already qualified, from accessing student loans – deterring any reskilling later in life. Here the panel went further than our proposal and recommended the complete abolition of ELQ rules. However, this went hand-in-hand with the introduction of a single lifelong learning loan for those doing level 4 and 5 qualifications in further education, equivalent to 4 years full time undergraduate study. These changes are likely to see a shift from graduates taking a second bachelor’s degree in a STEM subject to graduates taking a subsequent level 4/5 qualification in a wider range of qualifications. Whilst these level 4/5 qualifications must meet a set of employer-led standards, there is a risk that the additional qualifications taken by graduates meet personal, rather than labour market needs, and at substantial costs to taxpayers. If the government adopts this proposal it must carefully monitor the uptake of qualifications taken by graduates, and consider reintroducing some subject restrictions to ensure alignment with labour market demands.

EPI recommendation: The government should be clear on the distributional impact of its proposed changes to the student loan terms and should publish a detailed assessment alongside the review recommendations.

The panel did indeed publish the distributional impact of the changes to the loan terms. What it shows is that the loan terms remain broadly progressive, but less so than the current system. High earning graduates are the main beneficiaries of the proposed changes, mainly because their total repayments would be capped at 1.2 times the original loan amount, reducing their net contribution. More immediately concerning is the corresponding increase in the contributions of middle earners. Due to the reduction of the repayment threshold and increase to the repayment period these graduates will make increased lifetime contributions, and more of them will pay off their loan completely before it is written off.

Secondly and more significantly, we must consider the distributional impact of the whole package of recommendations. Specifically, the additional £0.7bn that is targeted at further education, where learners are more likely to be from disadvantaged backgrounds. If these recommendations are adopted, the package creates a system that is mostly progressive, with changes that benefit high earners and those from more disadvantaged backgrounds, with those graduates with just above average earnings picking up the tab.

And the areas of disagreement:

EPI recommendation: As there is no clear evidence that restoring maintenance grants will facilitate an improvement in access to university for those from disadvantaged backgrounds, the government should explore funding a range of alternative approaches to rescue the widening participation agenda, including additional investment to support disadvantaged children in the school system.

There is a lack of evidence that the removal of the previously available grants has had an impact on participation rates for disadvantaged young people. Despite this, in forming their recommendation, the panel has placed less emphasis on actual participation data, in favour of giving credence to self-reported debt aversion. Our report highlighted that the reintroduction of grants would primarily benefit the wealthiest 10 per cent of graduates. However, it is worth noting that the reintroduction of grants comes with a package of other changes that will see more graduates, including those eligible for maintenance grants, paying off their loans. These changes include the reduction in fees, the reduction of the repayment threshold and the extension of the repayment period. As more grant-eligible graduates will pay back their loan rather than having them written off, more will benefit from the reintroduction of grants. And it will be more middle earning graduates, rather than just high earning graduates, who now benefit. This strengthens the case for grants.

Nevertheless, it remains the case that maintenance grants are a subsidy from taxpayers to graduates who, on average, go on to earn well above average incomes. If the aim is to increase participation in higher education the government would do well to consider redirecting this investment to disadvantaged young people whilst they are still in school, as there’s breadth of research showing that the grades young people achieve have a much greater impact on their likelihood to participate in higher education.

There may be a stronger case for the redesigned student premium recommended by the panel. There is clear evidence that disadvantaged young people with the same A level grades as their wealthier peers are more likely to drop out and end up with lower degree outcomes. Funding that seeks to address this gap is welcome. As ever, the introduction of such a premium should be carefully evaluated to ensure it is having the desired impact.

It was disappointing to see that this was not considered by the panel. Though the panel clearly recognise the importance of these qualifications, as can be seen by their recommendation for the government to fund all adults undertaking their first level 3 qualification.

With almost half of adults qualified only up to GCSE level reporting cost as a barrier to them undertaking further learning, this may go someway to redressing the fall in take up. However, it is unclear why those taking higher level (4+) qualifications should be eligible for a maintenance finance, but not those taking level 3 qualifications. The panel’s proposal to introduce a lifetime entitlement meaning that many of those taking those higher-level qualifications could be taking maintenance loans alongside their second or even third such qualification, makes this decision particularly inconsistent.

Indeed, as many of those young adults qualified only up to GCSE level will be from more disadvantaged background this may also be a better use for the funding earmarked for maintenance grants, especially if social mobility is the goal.

There is much else in the report, and we do not cover it all here. However, it is also worth taking a step back to consider the wider message that the panel are seeking to deliver – that for too long funding for further education has fallen too far behind that of higher education. Our own recent research, which showed that the proportion of further education colleges with in-year deficits doubled from 20 per cent to 40 per cent in the last 6 years, would certainly seem to back this up.

While the proposals relating to funding the higher education system are likely to continue to be debated, particularly as a Conservative leadership competition gets underway, the principle of shifting priorities in order to secure a better deal for further education should be accepted.

You can read the full EPI report on the policy options for post-18 education and funding here.

Director, post 16 and skills at the Education Policy Institute (EPI) View Details
Further Information
Have a question about our research? Get in touch on
info@epi.org.uk or 020 7340 1160
Related 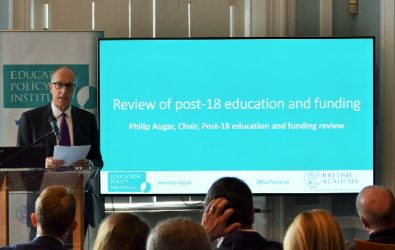 publications
Post-18 education and funding: options for the government review publications
Higher Education funding: a sustainable future? | Download presentations
Subscribe to our Newsletter
Our newsletter will keep you up to date with our most recent publications, reports, briefings and events on education and young people’s wellbeing
Subscribe
This site uses cookies: Find out more.